Overdosing on the Literary Blackpill

Overdosing on the Literary

The following essay is included in our first print issue, "Art & Literature for Dissidents", which argues how dissidents can reclaim culture from the Left, and it's one of only three articles contained in it that are going to be released on our site.

You can now order your copy here.

What young, dissident writers lack to instigate a literary movement

As I wrote last year in IM—1776 commenting on The New Literary Bad Boys, “toiling in the ether, producing interesting and transgressive work, are thousands of underrated young writers.” This is still largely true. But the edgy Twitter ecosystem that I was observing and usually births such authors isn’t without its problems. The young right-leaning fiction writer trying to make a name for himself in the online dissident sphere today is afflicted with a compulsion that makes him interchangeable with all the others like him trying to rise out of the same ecosystem — he is terminally blackpilled.

While these writers certainly don’t lack reasons to be depressed about the world and their place in it, with the state of the feminized West and an elite literary world repulsed by masculine writers, to commit to a blackpilled aesthetic at all times is to flatten one’s work and cater strictly to a niche readership of fellow depressives. Literary movements rise out of thematic and aesthetic kinship with one’s peers, but if any movement is to have a broader reach and shake up the game, it must also resonate with outsiders.

Therein lies the paradox of a literary movement: it must be aggressive enough to shock the ascendant traditions it is seeking to depose, while being attractive enough, either on aesthetic or thematic grounds (ideally both) so that it connects with readers outside the in-group. However, the current crop of young right-leaning writers self-publishing their half-finished texts or bombarding Twitter with their stream of consciousness outbursts about all manner of social ills — to the detriment of their work and the movement — all sound and read the same. This nascent literary movement, insofar as it can even be labelled as such, is debilitated by an immaturity posing as world-weariness. If the scene is to have any chance of rising out of the internet gutter, its practitioners must transcend some of their baser instincts.

To understand why so many young right-leaning writers, such as the authors published in Terror House Press and other dissident literary magazines are trafficking in the blackpilled aesthetic, one must first look at the major influences on the movement, beginning with French novelist Michel Houellebecq. The Frenchman can be said to have originated the contemporary blackpilled aesthetic with his debut novel Whatever, which featured a proto-incel computer programmer on the verge of violence. In the decades that followed his debut, Houellebecq’s stature only grew, but in recent years, as right-wing critics and pundits have latched on to his work due to its reactionary elements, his influence has become inescapable. If critics are framing their arguments according to a Houellebecqian worldview, fiction writers are taking it a step further and creating entire fictional universes that are nothing more than Houellebecq imitations.

To be influenced by a famous writer is crucial to one’s development as an author, but an influence cannot be a crutch, which is the purpose Houellebecq serves for so many in the dissident writing community. I can’t tell you how many times I read a short story by a young writer in a tiny, new literary magazine and encounter a paint-by-numbers plot of urban despair narrated by an antisocial loser who hates women. These stories, for the most part, contain the same narrative beats, and are uniformly awful in the way only the most self-indulgent and narcissistic work can be. The author, apparently, feels like shit about the state of women and the culture and his place on the societal totem pole, so he demands the reader feel the same way.

Blackpilled stories aren’t, in and of themselves, worthless, but they become so if they’re written by a certain kind of writer — young and immature — who is devoid of charm, humor, and all the other positive qualities that draw well-adjusted people to literature, and art in general. It’s easy for young writers to read Houellebecq and think: “I can document San Francisco or Miami or Cincinnati the same way he documents France,” and then go on and write a dozen rants disguised as stories about whores and cucks and all the usual cliched elements contained in these ‘blackpilled’ tales. But writing about ‘nasty things’ in an abrasive style is not difficult — anyone can look at our debased culture and document the dystopia. What these stories lack is the craft, wit, and detached humor that animates so much of Houellebecq’s work.

Houellebecq’s great skill as a novelist lies in his capacity to construct repulsive universes in a manner that is eminently readable to the normie and non-normie alike. While there are many other ‘disgusting’ writers that only obsessive readers of transgressive fiction know about, Houellebecq is the single one who blew up in popularity, because he is so in tune with the desires of elite culture that he always seems able to anticipate what next big theme is going to capture mainstream imagination. This isn’t to say that Houellebecq is antisocial, but that he’s someone who’s painfully crafted — there’s that word again — a persona that appeals to a mass readership. He is repulsive enough to scratch that itch we all have for the debased and debauched, but not to a degree that alienates him from the elite intelligentsia that does his bidding and promotes his work.

It’s only when these young, dissident writers get away from the terminally blackpilled themes and antisocial views that they’ll open themselves — and their work — to the possibilities inherent in style, tone, and narrative hijinks.

The blackpilled young writers are too attached to the repulsiveness they see in modernity. Houellebecq is a joy to read — and study — due to the ways in which he softens the repulsiveness of his fiction for mainstream consumption. He achieves his readable repulsive style by suffusing his work with a sly humor, employing a flat but not flattened prose style, and most important, filtering his acidic observations through a detached point of view that places his narrators at a remove from the repulsiveness they’re encountering. It is this detachment that grants readers an entryway into the Houellebecqian universe, and the aspect of his work that young right-leaning writers mining the blackpilled aesthetic need to most internalize. The Houellebecqian detachment is what allows his novels to breathe, and why readers willingly accept the repulsiveness contained within.

Another major influence on the blackpilled young writers of the internet is the self-published chronicler of Los Angeles and Twitter personality known as Delicious Tacos, whose career trajectory should serve as a model for young, dissident writers. The middle-aged Tacos built his initial readership with an extremely blackpilled style, sure, but in recent years his work has had a notable change in subject matter and tone. Tacos, like everyone, has certainly softened in middle-age, but it’s clear that his choice to deviate from the blackpilled style of his early career for a more ‘humanistic’ point of view was an intentional one. Tacos still publishes the occasional story about the degradations of dating in Los Angeles, but his recent work is far more naturalistic and even pleasant in sensibility. He publishes little stories about birds, his cats, and his trips to national parks. There’s a lightness to his new stories that is far more attractive than the aesthetic of his early days. Tacos seems to have learned that the angry young man shtick is not only corrosive psychologically, but stylistically. The blackpilled stories were mostly one-note anyway and getting away from them has benefited his work greatly. The lesson here is simple: art doesn’t have to be disgusting to be true.

Which brings us to Bronze Age Mindset by Bronze Age Pervert, the most popular self-published book among the young blackpilled writers. BAM, written in its idiosyncratic style fusing high brow and street vernacular, is nearly impossible to successfully copy, but the young writers enamored with it usually focus their attention on its content — as if it’s some kind of self-help guide — instead of focusing on its stylistic unconventionality. Say what you will about Bronze Age Pervert, but he’s created a style all his own, which is at times infuriating and repellant, but there’s still an energy and a playfulness to his work that many writers would do well to emulate. BAM is certainly a ‘blackpilled text’, but the driving force behind the book is not the content, but the aforementioned chaotic energy that permeates it, which is what young writers should be taking away from it. What a book says stylistically and aesthetically is often of greater import than whatever thematic point of view it’s trying — and often failing — to propagate.

The young dissident writers can also learn something from an artist whose predominant artistic mode isn’t fictional writing but comedic televisual skits: comedian and performance artist Sam Hyde. One of the few artists who’s successfully mined the blackpilled aesthetic with his Adult Swim show Million Dollar Extreme Presents: World Peace, Hyde has long been a master at fusing his avant-garde sensibilities to an absurdist, reactionary sense of humor. At its best, World Peace exposed the ridiculousness of modernity through a rightwing lens via hyper-absurdist skits that varied in tone. Some of the skits were highly melancholic, while others pushed the absurdity and zaniness to borderline belligerent levels, but the artistic glue that held it all together was Hyde’s comedic worldview: modernity is broken, and so we must challenge the brokenness with insane skits that induce not only laughter but clarity. It’s not a coincidence that the most successful piece of blackpilled art was televisual, because perpetual doom and gloom without comedic respite is unwatchable; the TV medium certainly curtailed some of Hyde’s more toxically blackpilled impulses. What made World Peace successful and allowed it to crossover to the mainstream in 2016 can also be applied to the written word. The clown always understands that if you want to get them to cry, you gotta get them laughing first.

Reveling in the ‘baseness’ of things might get you closer to the societal truths you seek to uncover, but that’s not enough. It’s only when these young, dissident writers get away from the terminally blackpilled themes and antisocial views that they’ll open themselves — and their work — to the possibilities inherent in style, tone, and narrative hijinks. This shift, in turn, might even push some of these writers away from blackpilled themes, which will differentiate them from the depressive horde. They might even find a new readership and instigate a literary movement.

Also from the issue: The Tom Wolfe Model

Alex Perez is a Cuban-American writer based in Miami and a graduate of the Iowa Writers’ Workshop. 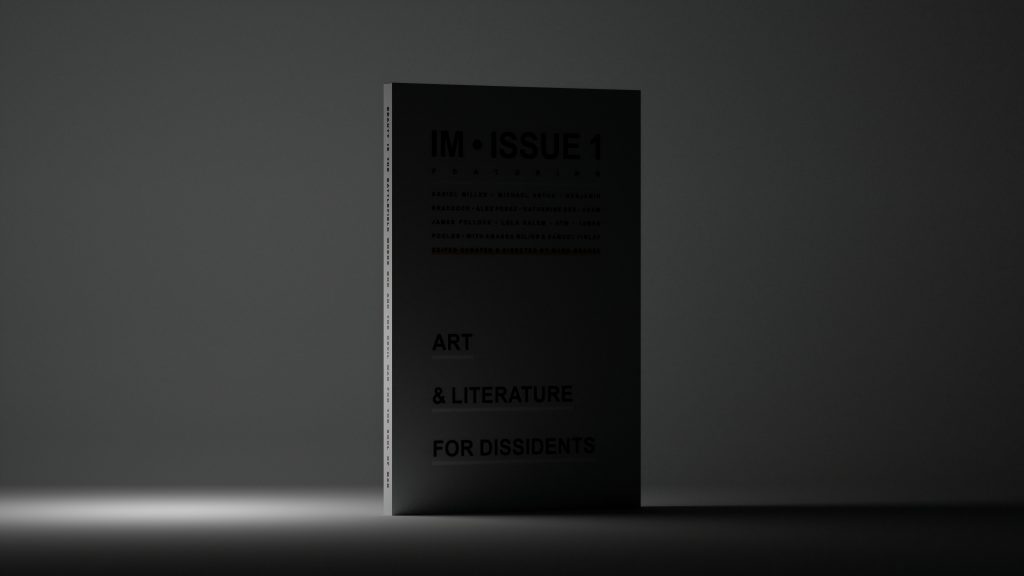 Our first issue, “Art & Literature for Dissidents”, is now available for purchase. Get your copy here.